He wore a pink shirt; Hewitt wore a local futbol jersey with his name and the No. 14 on it (for the first set, at least – locals will know more than I whose jersey it was).

The tennis? Well, if there’s any theory to extract from this lengthy exhibition season, it’s that the tennis is probably better when the guys play immediately after the season, before taking any time off, than it will be if they take a break, start up training a little (but not too much – the season is still nearly a month away) and try to play an exhibition.

Hewitt didn’t look like he was pushing it too much, most of the time – especially on serve.

As you can see from some of the photos here, it looks like a lot of fans paid pretty decent money to sit a million miles away, as the exhibition was held in a pretty big stadium. The ballkids probably had to run a heck of a lot, too, with no stands or fences to stop the ball.

Jelena Dokic will be playing, yet another comeback in a dramatic, stop-and-start career.

The Oz Open – always ahead of the curve with these things, does a great job live-streaming the event, and looking at the blue

courts and the Melbourne skyline always gets you in the mood for what’s to come – especially when the weather is grey and dingy at home.

The draw was made Sunday, and Casey Dellacqua is the top seed. Dokic and Jarmila Gajdosova (making a comeback of her own after mononucleosis pretty much wiped out 2013) are in the same half of the draw. Dokic has been out nearly two years, since April, 2012.

Also in the draw are both Rodionova sisters, Arina and Anastasia, as well as Bernard Tomic’s little sister Sara.

Here’s a story about it.

The men’s draw features fewer familiar names, but there’s no less at stake.

And here are the draws. It’s all men on Monday, with action starting at 10 a.m. in Melbourne (6 p.m. Sunday ET)

The matches should be streamed here. 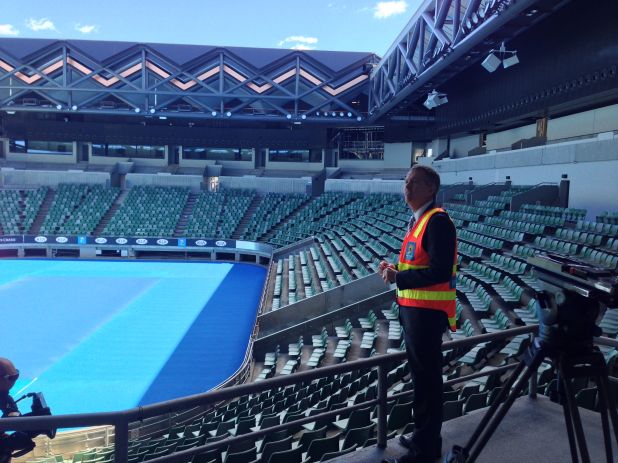 The Australian Open Twitter feed sends along this pic of Tennis Australia CEO Craig Tiley inside the newly rebuilt Margaret Court Arena, which will be in operation for next month’s event.

By the 2015 Oz Open, it will be retractable. For this year, it is supposed to be stationary (i.e. closed) all the time.  There will be 1,500 additional seats.

Depending on how how the fortnight turns out to be, you might find a few people vying to get scheduled on that court.

Here’s a drawing of what it will look like:

It’s a new season, and a new coaching relationship for Germany’s Angelique Kerber, who announced on Twitter that she has parted ways with longtime coach Torben X and will now work with Benjamin Ebrahimzadeh.

Ebrahimzadeh, who turns 33 in January, played pro, although he didn’t break into the top 500. German born and raised, he played Davis Cup for Iran in 2008. He has recently worked with Cedrik-Marcel Stebe and was part of the Schuettler-Waske tennis academy, although he no longer appears on the staff list on their website.

As for Beltz, who first worked with a young Kerber a decade ago and has been her travelling coach for the last three years, well, he’ll probably have to re-work his web page, which appears on the site of the Anglique Kerber Tennis Academy.

Goergous Georges already Down Under

Germany’s Julia Goerges is already down in Melbourne training with some of the Australian women – a month before the season starts.

Hey, why not? Although the forecast isn’t THAT great.

She The North: Bianca Andreescu