It’s the first of May, spring has sprung, and Wimbledon is ready to rumble.

During its annual spring press conference, the tournament and the All-England Club, inextricable, went through all of the changes, future plans and improvements for the grass-court Grand Slam.

Even if Madrid, Rome, the French Open and Queen’s Club haven’t even happened yet, the tournament will be coming before you know it.

Here are some of the key dates in the leadup.

June 25 – Qualifying begins at Roehampton. Technically, it’s held from Monday through Thursday of the week. Typically, rain intervenes and it goes beyond that.

June 27 – Seeds are announced. Although now that the “super-secret” grass seeding formula is public, it’s easier to do the math than it used to be.

Here’s a point-by-point summary of the main talking points for this year.

The All-England Club particularly supports several of the recommendations in the report. First, to expand the integrity-government structure and make it more independent. Also, the recommendations to restrict sale of data at the lower levels, ban betting sponsorships and the like.

Of course, it’s easy for them to say that. The tournament is a license to print money. And its list of official sponsors is crème de la crème.

The project is in the second of three years, and the new fixed roof is done. The “Walled Garden”, which is a two-level concessions structure that stands where fabulous Court 19 used to be, will be open.

There will an even larger screen for Wimbledon viewing from Henman Hill/Murray Mound. The old screen was 431 square feet. The new one is 60 feet wide. (Pulling out the dusty algebra skills, using a 16:9 aspect ratio, that would mean it’s, like, more than four times bigger. But we’ll report back when we see the real thing).

Of course, you have to queue up for a grounds pass, then queue up again for the resale booth, which opens at 3 p.m. But if you’re determined to get inside famed Centre Court, there is a way.

The total prize money for the 2018 edition will be the equivalent of $46,281,000 US. In pounds, it’s a 7.6 per cent increase. But with the value of the pound vs. the US dollar decreasing (for reasons we need not go into here), the net increase in US dollars is more like 13.5 per cent.

The increases will mostly be felt in the first four rounds of the main draw, and the qualifying – around 10 per cent increase. The Wheelchair events purse will increase 20 per cent.

And the purse for the Invitation Doubles (some legends, some former British players) will go up 11.7 per cent, beyond only the last four rounds of the men’s and women’s doubles. (The full chart is here)

Starting next year, in 2019, the women’s qualifying draw will be bigger. Currently at 96 players (as it is at the French Open and the Australian Open, but not at the US Open), it will then be 128 – same as the men’s draw.

The qualifying, which up until last year was free to enter, will double the £5 price to £10, and the capacity will be increased from 1,100 to 1,500. It didn’t appear to be sold out a year ago in the first incarnation of the expanded qualifying, although the tickets may well have all been sold. So there was plenty of room. The proceeds go to the Wimbledon foundation.

Again, one match court will be streamed.

As with the other Grand Slams, Wimbledon will extend the unworkable ITF rule of 20 seconds between points to 25. That puts it in line with the rules the players use all season on the ATP and WTA Tours.

However, there will be no serve clock on court; the chair umpires will continue to keep close tabs on this.

But the warmup ritual first tested in the qualifying at the US Open, then the Australian Open will be used: one minute from the walk, five minute warmup, and one minute to start the match. Again, no clock.

Wimbledon will adopt the plan, first tested out by the ATP Tour, of giving a player an incentive to not just show up and take the first-round prize money if he or she is injured.

If a player pulls out after noon on the Thursday before the start of the tournament – they have to be on-site – they will get 50 per cent of the first-round money. The lucky loser will get the other half (plus whatever they can earn if they win a round or two – or more).

A first-round loser in singles will earn more than $53,000 US this year. Half of that is … half of that. Players who retire or “perform below professional standards” in their first-round match can forfeit up to that entire amount. That one, subjectively evaluated (who’s to say that a small niggle doesn’t turn into something more major with one slip on the grass) is a tough one.

Mischa Zverev got nailed for that “below professional standards” thing at the Australian Open this year.

But it all started at Wimbledon a year ago, where eight men retired during their first-round matches; Nick Kyrgios, Denis Istomin, Viktor Troicki, Alexandr Dolgopolov (against Federer), Janko Tipsarevic (at 0-5 in the first set), Feliciano Lopez, Alexandr Dolgopolov (against Federer) and Martin Klizan (against Djokovic). The last two came on the same day, back to back on Centre Court.

There was only one first-round retirement on the women’s side: Anastasia Potapova.

“The AELTC remains strongly opposed to the introduction of any form of sanctioned coaching, whether it be on-court or from the stands.”

So unless the committee changes its mind (and the winds of change blow very slowly through the committee), there will be nothing like what has happened at the US Open and Australian qualifying, with players going over and consulting with their coaches on the side of the court.

There’s no mention of “non-sanctioned” coaching, which of course happens all the time.

The AELTC is taking a few steps to do its part to save the planet.

There will be no more plastic straws during the tournament.

And there will be 10 electric Jaguars among the fleet of tournament cars.

There will be a paper-bag option in the souvenir shops, and the existing plastic bags will be phased out.

The tournament has increased the free water refill points around the grounds to 87. Four years ago, there were 45.

The queue experience keeps getting more posh, as the fans can now buy their tickets using all the modern payment methods. That includes the ticket-resale ducats.

And the free public Wifi will hit the Queue for the first time. They’ll be able to get a livestream of whatever is showing on the big screen while they wait.

There also will be a new pop-up store on High Street in Wimbledon village, opening at the end of May. So you don’t need to actually get IN to the tournament to be able to buy your caps and towels.

For the first time, all 18 match courts will have multi-camera coverage, and commentary on a maximum of 11 courts at any one time.

They’ll also have net cams on the two stadium courts, and 17 robotic cameras roaming the grounds, including the practice courts at Aorangi.

If you want to watch the annual spring press conference, click here.

Davis Cup Finals to be split into … regional pool groups 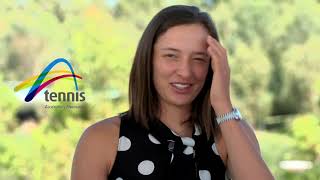 Djokovic solid in opening win over Sinner in Monte Carlo